Raghunatha Thondaiman had all reasons to be happy.His territories surrounding Pudukottai,his capital are well protected now and this was achieved by his crafty alliance with East india company which some thought was totally submissive and sycophantic.On the contrary,he became the most dependent ally to the British and after the defeat of the Mughals the entire south India, was now under the control of the company.Thondaiman's suffered heavy losses while fighting along with British against the French.Despite that his support to British was unwavering.

East india company allowed him to rule almost independently and infact Thondaiman, was spared from paying tributes too.
Such was his exalted and reassured position of the Pudukottai kingdom.
A quasi independent state,good astute king made the people happy too,calmness and safety prevailed in late 1790's around Pudukottai. Neighbouring kingdoms were always involved with some fight while Pudukottai was at peace which made livelihood and life better for the inhabitants of Pudukottai.

Raghunatha thondaiman,King of Pudukottai,was not happy however.His mind was restless and was irritable too.Information was passed on to the administrators that he is going to take a spiritual break for few days.His wife knew it could be for some days and Thondaiman’s favourite place to visit was Kudumiyan malai.
His  chariot had arrived by 10 am as sun was playing hide and seek with clouds. The weather was pleasant and Raghunathan informed the chariot guy to send a word for Krishnan, his confidant and friend.
Without waiting for his reply he quickly walked the pathway which had on either side mind boggling rock cut structures of nine avatars of lord Vishnu and the the inner sanctum had sculptures of lord Muruga,Ganesh,Ravanan,Vishnu,Oorthavathandavam of siva and in the end a beautiful Manmathan statue were present.
Raghunathan  quickly walked to the right and entered the shrine for the Goddess.
He took the blessings of the goddess and sat on the seven faced single stone. From there he can see two things.
On the right,the pilaster of the palliyarai(God and goddess sleeping place),a carving of two headed bird with single torso was present.
Two years before he understood the meaning of that bird which was called “Irandil paravai”.
“It means if you are not with me,I’m dead too”.
It shows the unison of the lovers a sort of siva,sakthi concept and aptly sculpted at the pilaster of
Palliyarai.
On the left stood the beautiful female statue who had built this part of the shrine and the stone on which Raghunathan  was sitting, now.
The  marriage of Thondaiman’s and also the coronation happened on this stone in front of the goddess and on the right stood silently the statue which was a Devaradiyar. Her name was Nachi, and she was standing close to one of the 24 supporting pillars of the shrine.
A wry smile from Raghunathan explained the feelings of the devaradiyar's plight till two years ago.
Beautiful and innocent  women were chosen deliberately for god’s  work mostly without their consent and subsequently the megalomaniac kings, made them tools for their pleasure.
Generations earlier they had come of their own will and his forefathers  have changed it.
He smiled because the devaradiyar could have bedded his fore father and the same person could have chiseled out the Irandil paravai too.
During Raghunathan’s tenure,devaradiyars work was made optional  and strict instructions were given to all the administrators that devaradiyars were equivalent to goddesses.
The cave temple was just behind the shrine of the goddess.
The chariot rider had by then was there and helped Raghunathan, to climb the cliff leading to the Nayanmars ledge.He had by now walked half the hill and could see the carvings of the Nayanmars.The solitary walk up and the melancholic ledge in front of lord Siva and parvati on the holy bull flanked by the Naynamars,the mere site of it gives closeness to the god.The cliff and the surrounding wind which whistles with the clouds makes one feel the five elements of Lord Siva.Raghunathan could feel it.Sekkizhar’s, Thiruthondarpuranam came in front of him.No where in the world,carvings of this magnitude has been made. 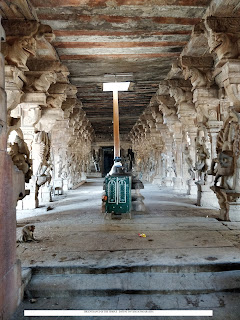 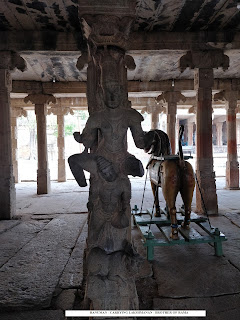 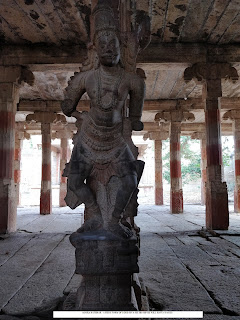 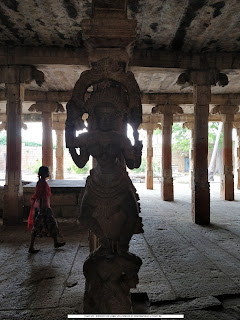 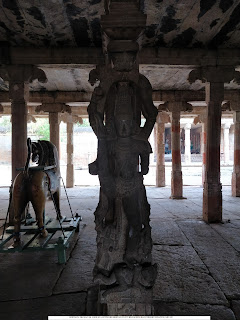 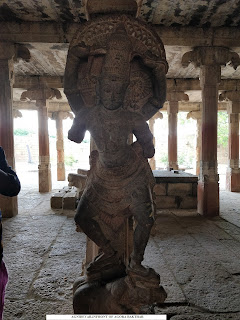 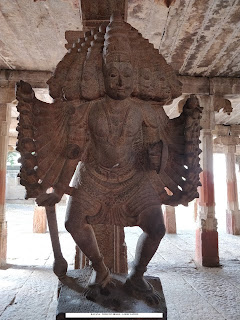 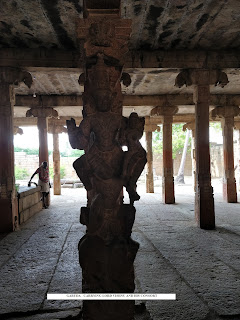 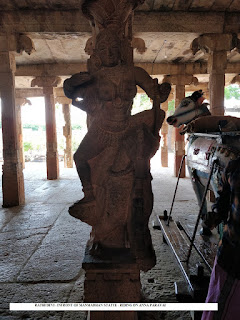 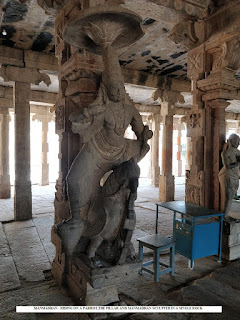 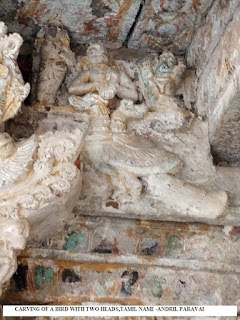 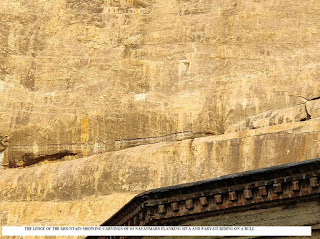 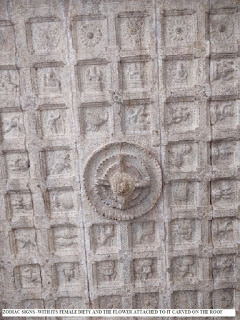 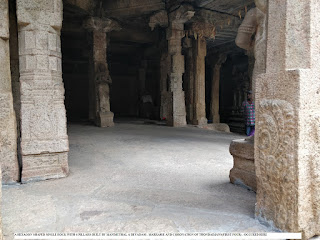 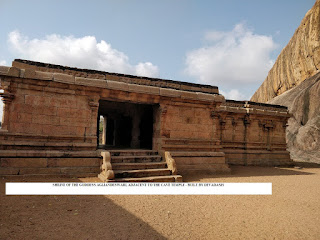 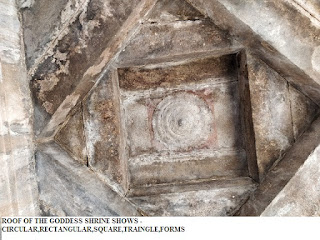 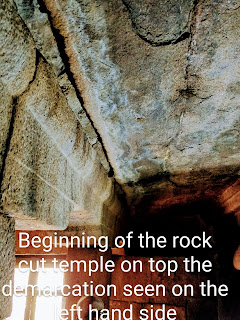 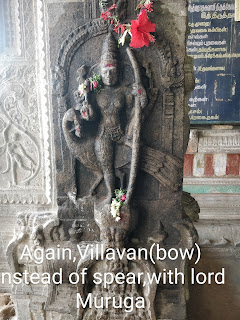 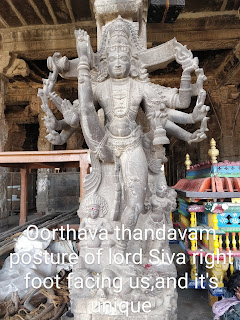 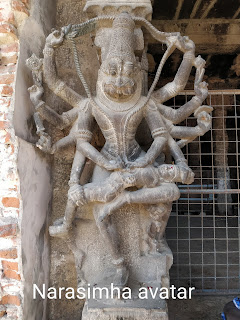 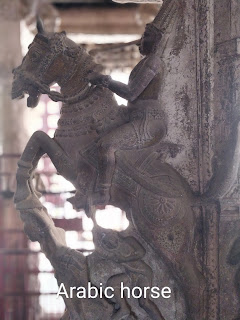 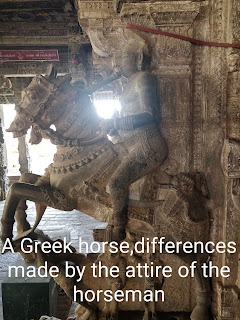 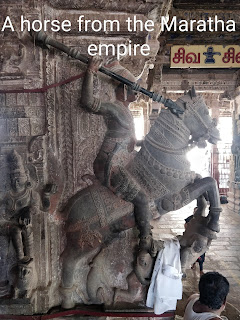 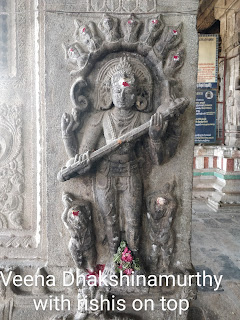 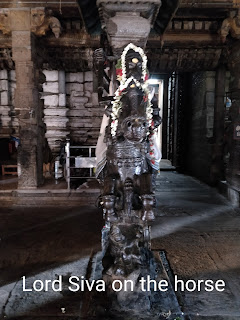 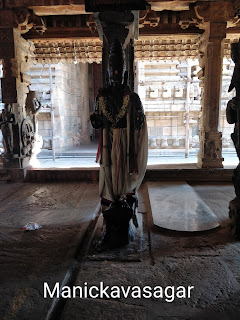 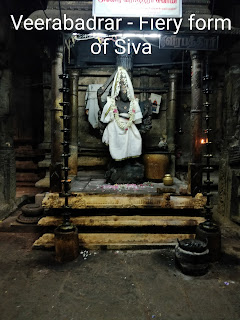 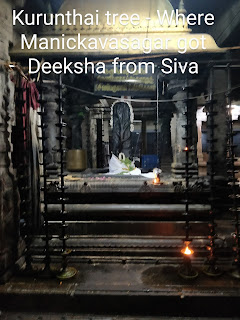 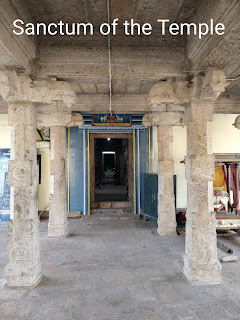 "Krishnan, he went to the back side of the temple can we go see him".
Yes, they crossed the temple pond and tried to search him.
But he was not found.
They asked about his whereabouts.
"Sidhar, will be at the Manickavasagar temple".
"We are here only".
"No king one kilometer from here there is another temple the temple built by Manickavasagar".
"What is this then?”
"This temple could have been built for Manickavasagar"
They walked to the that temple,by foot.
"Raghu, why can’t we go evening time".
"No Satya I want to see him".
"Who?".
"The dark man, no he is a sidhar".
They reached the smallish temple.
He was there.
Both of them went near him.
"This temple was built by Manickavasagar.The temple which you saw just before you came here was built for Manickavasagar".
"Don’t search him he is everywhere".
"You know god is the ultimate boundless,benevolent ,effulgence".
"The light of god is powerful then sun".
"Sun,can show all colours except darkness".
"But god will show darkness which is our ignorance and correct that too".
"That’s why he is boundless,benevolent,caring and cannot have a form".
"Path is the same,Trithankara,Siva,Vishnu,Buddha,Brahma all are same”.
He stood and started walking.
In two days life had come a full circle for Raghu.
What started as guilt feeling transformed into a search.
From the grandeur of Kudumiyan malai where coronation of Kings was done on the rock built by a Devadasi,the same kings devoured devadasis who were initially offered for god. The kings built a Devaraja cult around them and all of them were pompous and pretentious without understanding the reality.
My sin of handing over Kattabomman is not for safeguarding the people but it was protecting my territorial interests,once gain.
Narthamalai symbolises act of bigotry and self perpetuation.
The purpose of defeating ignorance and elevating the level of worship is the concept of Manickavasagar, and the result was Avudayar temple.
The elites installed Linga and made sure the idea of formless god,got defeated. This is  pestilence.
God is everywhere and he is formless.
Some one who understands him we call him as beggar.
"Krishnan,I'm leaving".
Raghu walked into the woods leaving Satya and the forms behind.

This blog is based on two true characters and one fictional character.
Raghunathan thondaiman was a king of Pudukottai,lived between 1759-1807,and he was close to British,he came in touch with Sivaramakrishnan and  spent 7 years with him, leaving his kingdom.
British recognised him with the title "RajBahadur".
Sivaramakrishnan is also called as “Sadasiva Brahmendra”was considered a Sidhar and he initiated Thondaiman into Dakshinamurthy mantra and also wrote that on a sand which the royal family treasures even now.
Satyakrishnan is a fictional character.
The temple where Manickavasagar got Deeksha or enlightenment was the last temple in the blog which is a km further south of the Avudayar temple.
Most of the things written in this blog are facts,though the narration is fictional.
Pattraruthu Parrikum- Kindly read Sivapuranam for the meaning and the blog is about this.
The conversion of fox to horse may look simple on paper but it has a philosophy going into it which has been explained.
All the four temples can be covered in a single day,start early and avoid summer months.
Accomodation is available at Aranthangi or Trichi,though Aranthangi is nearer.